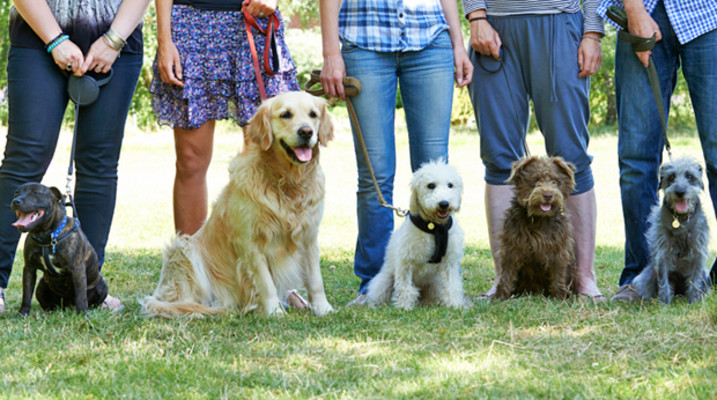 Do you, or someone you know, have a new dog? You may want to sign up for puppy training classes asap!

Because according to a new study in the Journal of Veterinary Behavior, training classes for puppies really DO work… and can lead to having a calmer, better-behaved pet for life. Which is great news considering a whopping 87% of older dogs are believed to have behavioral problems!
For this new study, researchers recruited puppies – including some as young as three months old and enrolled half of them in a 6-week puppy training program. The program was designed to help socialize young dogs, with other canines AND people. Dogs were also taught to obey simple commands – like “stay,” “lay down,” and “fetch” – using lots of treats and positive reinforcement. And dog owners were given advice on the best ways to house-train and discipline their puppies.

The result? When researchers followed up after a year, the dogs that had attended training classes were significantly less fearful and aggressive around strangers, compared to dogs that hadn’t taken classes. They were also up to THREE TIMES calmer in stressful situations, including grooming appointments, baths, and veterinary visits!

Researchers say this confirms that a puppy’s first year of life is as formative as a child’s when it comes to their brain development. So, the sooner you expose a puppy to training classes, the happier and better-behaved they’ll be for life!

Copyright © 2020 Hubbard Radio Seattle, LLC | 2060 Digital Pay | EEO | Careers | General Contest Rules | Terms of Use | Privacy Policy | Simple Pay | Public File | DMCA Notice
Any person with disabilities who needs help accessing the content of the FCC Public file should contact Lester Kinlow at LKinlow@hbi.com or (425) 653-9462
This web site is not intended for users located within the European Economic Area | Do Not Sell My Info - CA Resident Only